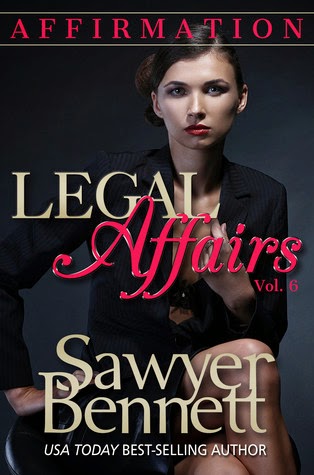 Affirmation
(Legal Affairs #6)
SYNOPSIS:
Things are off, and I can’t quite put my finger on it. Some things, however, are the same. For example, the sex with Matt is just as nuclear and consistent as it always has been.

Still… I feel like I’m holding onto Matt with my fingertips, like he’s on the verge of slipping away and I don’t know what to do.

I don’t want to be hurt, so I’m grasping hard and I can only hope that he wants me enough to hang on just as tight.

With this being the final installment of Sawyer’s serial series….this review comes with sadness. Why sadness? Well, this was a GREAT eff’ing story!!! It was simply magnificent. It was funny. It was hot. It was sexy. It was loving. It was everything I look for in a really good book…..but it was released in six installments, two weeks apart. Why was that better than a full length, standalone novel? Well, honestly….it probably wasn’t better, but it was sure neat the way it happened. I loved the fact that in between books on tours….I got to take an hour breather and read something that I knew was going to be a great pick-me-up in between heavy stories. This series has truly landed itself on my favorites of 2014 so far. Loved it!!

This book starts out with such sadness and hurt. I could definitely “feel” the pain that Mac was feeling. She knew something was off after Marissa gallivanted into their weekend and took Gabe. Matt was….someone else. I liken it to a switch. It just…..flipped him. He was different, and Mac new it.

Some things are the same. For example, the sex is still nuclear and consistent. We can’t get enough of each other and for that, I’m thankful. Still….I feel like I’m grasping onto Matt, like he’s on the verge of slipping away, and that is causing me a lot of anxiety.

That alone shows the angst and the pure affection and love she feels for Matt….and is afraid to lose it. She is a strong woman, don’t get me wrong. She is very strong….but we all know that the right man can make us weak. That is Matt. He is her biggest weakness. After talking it over with Macy, and spilling her concerns, Macy suggests the obvious and advises her to find out and talk to Matt to find out what’s really going on. Did I mention that there is some great humor in this book?

“Talk to Matt? Are you kidding? Like an actual conversation? Any time I try, he sidetracks me with sex. He’s deflecting me by preying on my ovaries.”

Ok…I just giggled, because even though Mac is really trying to work through her feelings knowing she has already told Matt she loves him, she is still doing it with humor. I do love their dynamic and their personalities while they are together, because they complement each other so well, but she is quirky and I love her!! She needs to do what she needs to do, and boy!! Does Mac come on strong in this book!

With Matt causing problems, because, you know, it’s always the man’s fault! Hahaha! Anyways, with Matt causing problems, Mac decides once and for all that she needs to move on….in the hardest way possible. I think my heart literally cracked in two!! My heart broke knowing the chemistry these two had, I wanted them to work! I wanted it ALL! You would think I was in love with Matt…..well, who says I’m not?

We are fucking perfect in bed together. Absolutely perfect. It just sucks that it’s the only way we seem to be compatible. ~Mac

Anyways, with the finality that Mac sets her goals with, the story took a very drastic turn. I felt the pain and the anguish that Matt and Mac both felt. We only got to see this in Mac’s POV, but Matt’s actions show him finally accepting the inevitable. And seriously….my jaw hit the floor and my heart was just in shock.

He does nothing more than bring his eyes up to mine though. They look sad for just a flash, and then he gives me a small smile.

I didn’t like the fact that he was just “accepting” of this fate!!! Fight for her dammit!!! I wanted to run and hug them both, tell them it will all be ok….and they ride off into the sunset on a white horse. Ok….dramatic much? Maybe. But I seriously loved this story SO much. It was the best short story series I have EVER read. I enjoyed it and loved reading how it all played out and how the series ended the way it did. The ending thoroughly melted me and it was perfect. Achingly perfect. *sigh*

Mac and Matt and their happily ever after deserve 5 stars with all the pomp and circumstance, for this installment, but also the entire series. I would recommend this over and over again….to anyone that wanted to read a short book in between heavy books, to anyone wanting to sit down and giggle and swoon that didn’t have a lot of time, to anyone that wanted a well written, easily enjoyable, very lovable book series.

I am sad that I don’t have something to look forward to every 2 weeks now….it was THAT good. Sawyer!!! I need more Matt and Mac!!

***An ARC of "Affirmation" was provided in exchange for an honest review. Thanks!!***

Legal Affairs is a serial romance with a whole lot of hot and a little bit of funny. It has six volumes that will be released every two weeks.

About the Author:
Sawyer Bennett 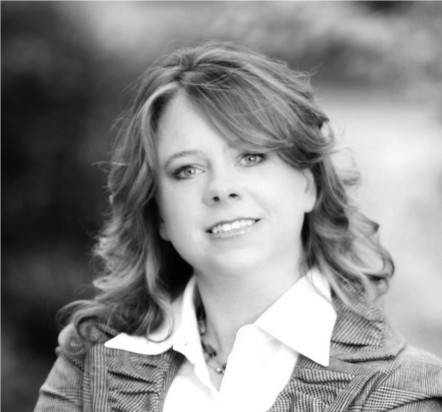 USA Today Best-Selling Author, Sawyer Bennett is a snarky southern woman and reformed trial lawyer who decided to finally start putting on paper all of the stories that were floating in her head. She is married to a mobster (well, a market researcher) and they have two big, furry dogs who hog the bed. Sawyer would like to report she doesn't have many weaknesses but can be bribed with a nominal amount of milk chocolate.