Professor Gabriel Emerson has left his position at the University of Toronto to embark on a new life with his beloved Julianne. Together, he’s confident that they can face any challenge. And he’s eager to become a father.

But Julianne’s graduate program threatens Gabriel’s plans, as the pressures of being a student become all consuming. When she is given the honor of presenting an academic lecture at Oxford, Gabriel is forced to confront Julianne about the subject of her presentation—research that conflicts with his own. And in Oxford, several individuals from their past appear, including an old nemesis intent on humiliating Julia and exposing one of Gabriel’s darkest secrets.

In an effort to confront his remaining demons, Gabriel begins a quest to discover more about his biological parents, beginning a chain of events that has startling repercussions for himself, Julianne, and his hope of having a family.

Passionate. Beautiful. Romantic.
Sometimes a book is more than just a book -- it deserves respect. That’s how I feel about “Gabriel’s Redemption.” To me, it’s more than another romance read… it’s a beautiful piece of intellectual literature. Actually, I feel this way about the entire series. Sylvain Reynard has a phenomenal writing style that I completely admire. It enhances my reading experience and allows me to enjoy the book even more. Honestly, to say I’m a huge fan is putting it mildly.

“Gabriel’s Redemption” is the third and final book in The Gabriel's Inferno Series.  If you have yet to read books one and two, “Gabriel’s Inferno” and “Gabriel’s Rapture”, then go buy them now and stop reading this review here. I will discuss certain details that will ruin those books for you. However, if you have read both books, then feel free to read this review since it will be completely spoiler free where book three is concerned.

“Every night when I fall asleep with her in my arms, I thank God she’s mine. Every morning when I wake up, my first thought is that I’m grateful she married me. I will never be worthy of her. But I spend every day trying my damnedest.”

Plot wise, this book picks up where book two, “Gabriel’s Rapture”, ended. We are a few months into Gabriel and Julia’s marriage. I absolutely love Gabriel. I want to just put that out there, right off the bat. I loved him madly after the first two books, and now, I’m blown away! He’s not only hot but incredibly intelligent, sweet, kind, caring, and PERFECT – inner demons and all. The way he looks after Julia and loves her, leaves me speechless. He is just a phenomenal character and one that will stay with me for some time to come.

“My milestones are only important because of you. Without you, they’d be empty days.”- Gabriel

Julia is one of my favorite female characters. She’s beautiful, gentle, and has a pure heart. She’s the type of character that makes me, as a reader, reflect upon certain things in life, like kindness and humanity. Here, we get a stronger, more focused, and at times stubborn side to Julia. She’s well into her PhD and has her mind set on one thing – getting her degree and becoming a Professor.

We are taken through Julia and Gabriel’s struggles as a married couple. You could say their problems were those of normal newlyweds. Well, as far as “normal” can go with Gabriel and Julia, that is. Their insecurities are brought to light more so in this book than in the other two books in the series. People from their pasts resurface and make things even harder for them. These ghosts from the past challenge their relationship yet never their love.

“You can’t eliminate your past but you don’t have to be controlled by it.”

Gabriel and Julia’s love runs very deep and as a reader, I felt it. Their passion, their romance, their heartbreak…everything, was very well portrayed and developed. Sylvain Reynard is a truly talented author. Once again, I must say, I’m a huge fan of his writing style. He even adds wittiness to the storyline through a few parenthetical notes that manage to balance out the plot perfectly, making it a deep yet fun read. There were also some very hot, yet beautiful scenes in this book.

“I could spend the rest of my life inside you and die happy. You’re my home.”

In “Gabriel’s Redemption”, we get to see a different side to several secondary characters, like Paul, Paulina, and even Simon and Professor Pacciani. For instance, I’ve always known Paul was hot, but I’ve been too #TeamGabriel to care for him -- until THIS book. We get to see Paul in a different environment, interacting with different characters. In a way, we get a sexier, rougher version of him, too. I even found myself swooning for Paul! *Gasp!* Heck, I’ll even say that I wish he was getting his own book! Would love to see him get his happy ending with that certain character we see him with.

Now, about the ending. Without giving anything away, I will say that it’s a truly beautiful scene to end the book with. However, I feel like it was a bit too open-ended for me...like there are things I still want to know. Not only about Julia and Gabriel (specifically, a certain preoccupation/worry Julia had throughout the entire book) but also about a few of the other characters.  But mind you, this didn't make the book less amazing for me. Nothing could do that!!! I suppose, like a book buddy told me, that SR leaves things open to our imagination. Which is also great. All in all, to me, this book was a great conclusion to a phenomenal series. I HIGHLY recommend you read The Gabriel Series!

I was beyond sad thinking this would be the last time we’d see Gabriel. But, NO! Sylvain Reynard must really love us because we will see him make an appearance in his next book, THE RAVEN.  This is the first book in his new Paranormal Romance Series! Want to know something else??? The Raven has a few connections with The Gabriel Series!! Check out his official announcement, here: http://www.sylvainreynard.com/2013/11/my-next-novel-revealed.html 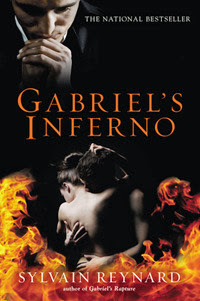 GABRIEL'S INFERNO
Gabriel's Inferno Series, Book 1
~ SYNOPSIS ~
Enigmatic and sexy, Professor Gabriel Emerson is a well respected Dante specialist by day, but by night he devotes himself to an uninhibited life of pleasure. He uses his notorious good looks and sophisticated charm to gratify his every whim, but is secretly tortured by his dark past and consumed by the profound belief that he is beyond all hope of redemption. When the sweet and innocent Julia Mitchell enrolls as his graduate student, his attraction and mysterious connection to her not only jeopardizes his career, but sends him on a journey in which his past and his present collide. An intriguing and sinful exploration of seduction, forbidden love and redemption, "Gabriel's Inferno" is a captivating and wildly passionate tale of one man's escape from his own personal hell as he tries to earn the impossible...forgiveness and love. 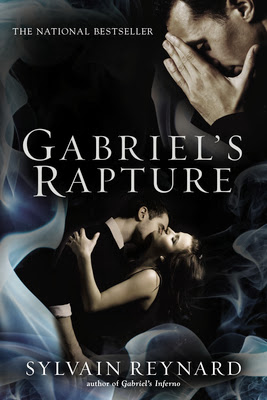 GABRIEL'S REDEMPTION
Gabriel's Inferno Series, Book 2
~ SYNOPSIS ~
Professor Gabriel Emerson has embarked on a passionate, yet clandestine affair with his former student, Julia Mitchell. Sequestered on a romantic holiday in Italy, he tutors her in the sensual delights of the body and the raptures of sex. But when they return, their happiness is threatened by conspiring students, academic politics, and a jealous ex-lover. When Gabriel is confronted by the university administration, will he succumb to Dante's fate? Or will he fight to keep Julia, his Beatrice, forever? In Gabriel's Rapture, the brilliant sequel to the wildly successful debut novel, Gabriel's Inferno, Sylvain Reynard weaves an exquisite love story that will touch the reader's mind, body, and soul, forever.

~ ABOUT THE AUTHOR ~
Sylvain Reynard

I'm interested in the way literature can help us explore aspects of the human condition - particularly suffering, sex, love, faith, and redemption. My favourite stories are those in which a character takes a journey, either a physical journey to a new and exciting place, or a personal journey in which he or she learns something about himself/herself.

I'm also interested in how aesthetic elements such as art, architecture, and music can be used to tell a story or to illuminate the traits of a particular character. In my writing, I combine all of these elements with the themes of redemption, forgiveness, and the transformative power of goodness.

I try to use my platform as an author to raise awareness about the following charities: Now I Lay Me Down to Sleep Foundation, WorldVision, Alex's Lemonade Stand, and Covenant House. For more information, see my Twitter account.

Posted by HEA Bookshelf at 5:58 PM