“I’m not very good at sharing, especially when it comes to you Harper.”

A pain too hard to understand.
A struggle too deep to reach.
A love too complicated to work…but too intense to let go.
Harper Mae ran as far away as she could from her abusive past. She went to a different city and numbed her pain by using men, never sleeping with the same guy more than once.
Ryder worked at a coffee shop trying blend in with the rest of the world, desperately trying to live a normal life. After leaving a relationship and losing his family, he vowed never to fall in love again.

Until one day they are unexpectedly drawn to each other unable to let go.

Harper and Ryder’s turbulent relationship, two people who are struggling to find themselves, realize the answer lies within each other.
Secrets, so deep, that both have, end up surfacing causing irrevocable pain.
Will their love be strong enough to survive or will their pain be the downfall to their relationship?
Will Harper open up enough to share her past with Ryder or will he be just another number on her list?


"I don't want to share you with anyone else Harper, not even with the memories of your past."

Running away from an abusive past, Harper Mae found herself in San Diego, California. There, she met her best friend and partner in crime, Skye. Together they did everything... from partying to studying. They were the sisters they never had, a match made in heaven.

Harper is a very strong 21 year-old. She knows she's screwed up, yet she owns it and doesn't apologize for her actions to anyone.  Loved her attitude! Very down to earth and humble.
It was during one of her and Skye's study sessions,  that she came across my new book boyfriend.. Hello Ryder!!! This guy.... oh my... this .. guy... even his name is sexy! haha!! He is the perfect combination of sweet and rough and oh, so mysterious. Yes, Ryder too has a past and secrets.

The chemistry between Ryder and Harper had me fanning myself. Seriously!!
You could totally tell they fell for each other instantly. For a moment I felt like it had been too intense, too quickly, but then I understood them. It was just how they were. That simple.

"If you keep falling, I'll have to keep picking you up Harper."

"I will never leave you... ever. You're too beautiful and broken for me to just walk and never look back."

Harper's past haunts her more than she ever expected and on top of that, she comes face to face with her main insecurity plus Ryder's secrets. So basically, the story line is full of ups and downs.
Overall, "Sharing Harper" is a raw and emotional read. The way V. Murphy wrote this book was simply incredible. She described everything to the last detail. I believe that even the person with the least imagination won't have any problem visualizing every scene in this book.  It's that descriptive. So props to the author!

Regarding the ending..
There isn't a cliffhanger since it actually ends in a good place, but there's more to the story. So.. good news... There's a second book on it's way!!!! squeee!! I'm super excited to read more about Ryder and Harper.

"I don't want to live another moment without him and without sharing every inch of my soul with him." 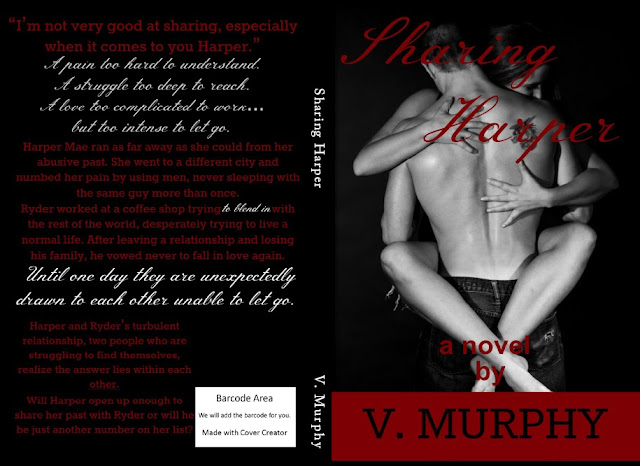 Go to the FB Event: here

About the author:
V. Murphy

Her name is V. Murphy and she loves everything about reading (some may call her a bibliophile). She is a current graduate from the University of Illinois Urbana-Champaign and heading out west to live the California dream while pursuing her masters degree in school counseling at the University of San Diego. You can find her writing in a Panera, small coffeeshop or on campus. When she is not spending her time in school or reading, she loves to write, bake and shop.