The last thing Holly Harris expected was to wind up nineteen, knocked-up, and all alone. When Coop left to pursue his dreams of becoming a rock god, he left a tiny piece of him behind.

Jackson Rowe tried filling the void his family left by drinking, screwing around, and leaving a string of heartbroken women in his wake. Moving back to Sugartown should have been easy, but he hadn’t counted on the fact his sometimes attraction to Holly would still be alive and kicking—and he sure as hell hadn’t counted on her being pregnant with another man’s baby.

They drive one another crazy, and yet they can’t stay away.

When old flames resurface, and even older wounds are torn open, can two people so similar make it work? Or will their stubbornness only drive them further apart?

Holly
I glance over at Jackson. He’s munching out on Smith’s chips and singing along to some crappy music on the radio, and he’s completely oblivious to the fact that he’s so drop-freaking-dead gorgeous when he’s letting go. Not that he’s ever really been uptight about anything; more that when he’s not “on”, when he’s not trying to get into someone’s pants, or lead them to make stupid decisions because he’s so very clever with his hands and mouth, he’s just kind of … perfect.
Then, of course, he goes and opens his fat mouth.
“You lovin’ on old Jack there, sweetheart?” he asks, glancing back and forth between me and the road.
I smile snidely. “No, you just have chips on your face.”
He runs his hand across his mouth and over the stubble on his chin, brushing away crumbs that aren’t there. I love it when he forgets to shave, and the biting sensation of his facial hair against my soft lips as he’s going down on me. I could come just thinking about it. I squeeze my legs together until the seam of my shorts grazes my clit. Then I close my eyes and slowly shift my legs this way and that, enough to feel the heat in my belly unfurling.
“Holy shit, Hols, you okay?”
My eyes snap open, my heart races and heat floods my cheeks. I glare at him. “Yeah, just tired is all.”
“Nice try, sweetheart. I know your tired face and that’s not it. That’s your ‘I need to be fucked’ face. You want me to pull the car over?”
“No!” I say, a little too quickly, “Just keep driving.”

“All right, but I gotta warn you, darlin’, you keep writhing that way, and I’m gonna need to pull the car over and knock one out myself.” He shrugs. “Or fuck you senseless.” 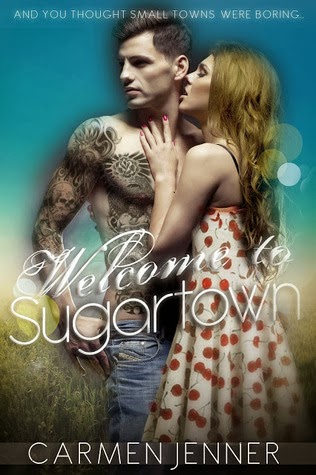 Welcome to Sugartown
(Sugartown #1)
Synopsis:
Ana Belle never wanted anything more than to hang up her apron, jump on her Vespa and ride off into the sunset, leaving Sugartown in the dust.

Elijah Cade never wanted anything more than a hot meal, a side of hot arse and a soft place to lay his head at night where he could forget about his past.

But you know what they say about wanting: you always want what you can’t have.

Nineteen year-old virgin Ana is about to discover that’s not quite true because a six foot three, hotter than hell, tattooed, Aussie sex god just rode into town. He’s had a taste of her pie and he wants more– no really, Ana bakes pies for a living, get your mind out of the gutter.

She’d be willing to hand over everything tied up in a big red bow, there’s just one problem; Elijah has secrets dirtier than last week’s underwear. Secrets that won’t just break Ana’s heart, but put her life at risk, too. When those secrets come to light, their relationship is pushed to breaking point.

Add to that a psychotic nympho best friend, an overbearing father, a cuter than humanly possible kid brother, a wanton womanizing cousin, the ex from hell and more pies than you could poke a ... err ... stick ... at.

And you thought small towns were boring.

About the Author:
Carmen Jenner

Carmen Jenner is a thirty-something author, doctor, pilot and CIA agent.
She's also a compulsive, flagrant prevaricator who gets to make things up for a living.
While Sugartown may not technically exist, Carmen grew up in a small Australian town just like it, and just like her characters, she always longed for something more. They didn't have an Elijah Cade, though. If they did, you can be sure she would have never left.

(5) eBook Copies of Welcome to Sugartown