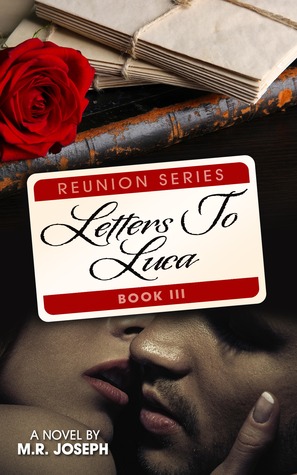 Leighton Parks~
I only wrote the love letters to my high school crush for fear if he truly knew my identity, I would be rejected. I wasn't the most confident girl in my school, and he was well... he was Luca Ferro. How could he ever be interested in a shy, book worm like me? That's why I wrote them. To tell him all the feelings I had for him. When I stopped writing the letters, I never imagined that 10 years later they’d come back to change my life, forever.

Luca Ferro~
I always believed in soul mates, finding that one true love. And I found her, my letter girl, but never knew who she was. She was a mystery. Her letters, her words, meant more to me than anything. I searched for her, thought of her day and night, but never found her. I gave up on the idea of finding the missing piece to my puzzle—that is until she walked right into my life and I didn’t know what hit me.

A chance encounter brings Luca and Leighton together ten years later at their high school reunion. Will past secrets threaten to destroy their futures, or will love be written in the stars for them just as it was in Leighton’s letters?

Now, I must explain. I NEVER read books that are part of series out of order. I don’t care if they are each stand-alone books, I always, always, read them in order. I’m picky like that. However, I am so glad I made the exception with Letters to Luca. And I have Abby from Abby’s Book Blog to thank for that! After watching her book trailer, I knew I HAD to read this book.

At least I can take with me the knowledge that he read them. He read my words. The words that are only meant for him and only him. Time to grow a set and write my letters to Luca.

Once I started reading, I could not stop. I literally took my iPad to the gym and read while working out!! Yes, I was that hooked. From the very first chapter, I connected with the story line and the characters. The things they said and how they said them were so natural, down to earth, and flat out funny! I laughed and giggled a lot throughout the book. Honestly, it was like ‘hearing’ me talk…loved it! And holy HOTNESS!!! Wait until you read those steamy scenes!!! Piece of advice? Don’t read the book while at a public place. It can be quite embarrassing… squirming where others can see and all. Sigh…

But let’s be serious, he doesn’t even know someone as simple as me exists.

Since high school, Leighton loved Luca. Deeply and truly loved him. But he had absolutely no idea who she was. Luca was the popular athlete, while Leighton was…well, not popular. She was more like the shy, geeky girl that always sat at the back in a classroom. But even so, Leighton saw what everyone seemed to miss. She saw beyond Luca’s very hot athletic body, she saw him…she saw who Luca really was. The gentle, sweet, and caring boy that simply loved baseball. Thinking that he would never go for a girl like her, Leighton decided to express her feelings for him through letters. And that’s where it all began.

Leighton wrote Luca for a long time, even after they both graduated high school. Luca became rather attached to the letters. To the point where he basically depended on them to get by during some very heartbreaking times in his life.  The letters were something beyond special between them…it was their secret. Until the letters stopped. Leighton had to move on from Luca, didn’t she? After all, it wasn’t exactly fair for her -- loving him from afar for so long and never being able to do anything about it.

Now all grown up, Leighton wasn’t in the best emotional place ever. Her recent predicament caused her to move back home temporarily. Back to a place where Luca was now the owner of his father’s restaurant. A quite funny situation brought Leighton face to face with the boy she had once loved. Now a man, she would realize she still loved.  But you see, Luca still to that day, had no clue who his ‘letter girl’ was.

Luca never had a serious relationship. No one measured up to his girl from the letters. The girl he had fallen in love with, without even knowing her name. But there was something about Leighton….. Luca gave into an inexplicable connection and attraction he felt towards her. He knew in his gut she was special, he just didn’t know why.

Their relationship was hot, passionate, and just – wow. They truly clicked. But, Leighton had more than one secret. Not only was she the girl from the letters, but she had done something else that just might tear them apart. And as usual, we had that character that everyone loves to hate… Val. *Queue the angst!* Boy did I hate her!!!! UGH! She definitely ruined things…
Once Leighton’s secrets were brought to light, Luca’s pain was heartbreaking. He felt beyond betrayed by the woman he had opened his heart to. The woman he thought he would spend the rest of his life with. Everything he said and did after he found out, I completely understood and agreed with. The way MR Joseph wrote this story line, allowed me to be right there with Luca and Leighton. Safe to say, I was an emotional wreck. I didn't know whose side to take!!! I understood both! Sigh.

I honestly did not want this book to end. I was emotionally invested in these characters and their story, so I wanted the book to go on forever. Towards the end, my soul smiled and happy danced. Luca Ferro will definitely hold a soft spot in my heart for a long time. Beautiful ending!!! Everything wrapped up perfectly.

This was my first book by MR Joseph and I can guarantee that it will not be my last!!!
I HIGHLY recommend you buy this book!!!!

You are the one whose heart I hold.

***A copy of Letters to Luca was provided by author in exchange for an honest review. Thanks!!!*** 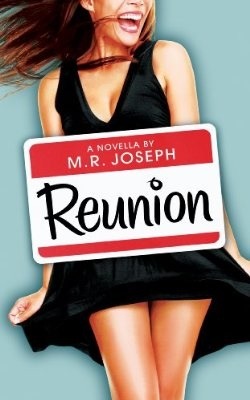 Reunion
(Reunion Series #1)
Synopsis:
Savannah Garrett had always had a good head on her shoulders. She was well-educated and had a fantastic teaching job at a prestigious school in Boston. Her life was just where she wanted it to be until she returned to her home town in the suburbs of Philadelphia for her 10 year class reunion.

Seeing old friends and reminiscing about her high school days was expected. Seeing her first love after five years was not. Can she handle seeing Sam Reynolds after all this time and could she get through the hurt and pain their past relationship had caused?

Can there be a second chance for Savannah and Sam or would a deep, dark secret destroy their chances of happiness? 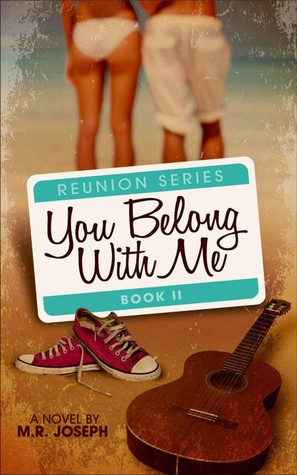 You Belong With Me
(Reunion Series #2)
Synopsis:
What happens when a man falls in love with his best friend? How does he convince her to love him in return if she has no idea that his feelings run so deep?

Carter London has everything a man should want, a blooming career as a sexy rock star, a loving family, women who adore his model-perfect looks, and great friends. What he doesn't have is the love of the girl who stole his heart nine years ago.

Casey Colbert is the converse-wearing epitome of the girl next door. She's smart, beautiful, and best friends with Carter London. She knows all there is to know about her sex-on-a-stick best friend, except the well-guarded secret of her holding the key to his heart.

Carter returns to his hometown of Indian Shores, Florida for his ten year college reunion, to profess his love to Casey. Unfortunately, he discovers her heart is already spoken for by none other than Jordan Reid, who is gorgeous, sweet and insanely rich.

Carter vows to use his time back home to win over the one woman who can set his world on edge with just a glimpse of her smile. Will Casey see the love that's right in front of her eyes? Or will the mistakes of his past and his obsession with loving her overwhelm the girl who already has it all?

About the Author:
M.R. Joseph 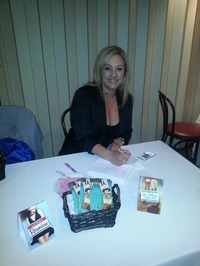 I'm a book enthusiast, turned author, who loves all things "Happily Ever After".

My first book, 'Reunion' debuted in November, 2012. Meant only to be a Christmas gift to my family and closest friends, word got out, and here I am. The second in the series, 'You Belong With Me', released in March, 2013, and the final installment in the series, 'Letters to Luca', will debut August 1st.

Mom and wife by day, writer of contemporary romance by night, I believe in soul mates, true love, and all that mushy stuff.