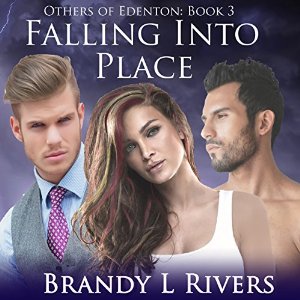 FALLING INTO PLACE by Brandy L Rivers
Others of Edenton, #3
AUDIO BOOK narrated by Kelley Hazen
Genre: Paranormal Romance
- SYNOPSIS -
Robert would have done anything for Liz, even let her go when she claimed she needed to be alone. With his life in shambles, he dove into his work as a Silver Council enforcer.

Liz never fit in, but to protect her first love, she walked away when a wild burst of magic nearly killed him. Tremaine found her, and helped her put her life back together.

The man who tore her world apart awakes from a 21 year slumber with revenge on his mind. Nothing will stop James from tearing the power from Liz’s body.

After learning James is alive, Robert rushes to Liz and bands together with Tremaine to keep her safe. Facing her worst fears Liz realizes she can only fall apart or fall into place.

★★★★★ AUDIO BOOK REVIEW ★★★★★
You really can't go wrong with a phenomenal author and an amazing narrator that truly brings the story to life. Fantastic!!! Kelley Hazen truly brings these fabulous characters to life!!

I am in love with this series and I will jump at every single opportunity I get to review not only the books, but the audio books as well.

These characters are ones I will always cherish. Their journeys are memorable adventures that as a reader, I can't help but crave more of.

Tremaine, Liz, and Robert's story was fantastic and HOT. Oh my goodness!! Listening to those steamy scenes was something else, let me tell ya! Now, if you're in public while listening, be prepared for the most awkward feeling ever! I kept looking around, all paranoid, thinking people KNEW what I was listening to! Lol!

Liz has truly been through SO much, alongside Robert and Tremaine. A LOT of heartache. James was pure EVIL. Sheesh. I truly loathed his character. He hurt and in many ways, broke, a lot of people. A lot. He was just.... EVIL.

Liz's relationship with Robert and Tremaine worked for them. They all completed each other and were what they unknowingly needed. It was different, but it was them. They were happy and that's all that mattered.

I cannot wait to see more about them in Entangled Darkness!!! I hear we're in for even hotter scenes!!

On a side note: I loved learning more about Christian! If you're reading the series out of order (like I have), then maybe you haven't met him yet, so just in case, he's the character from the previous installment (Others of Edenton 2.5): Fated Love (his and Delilah's story). (See review below!)

While I'm on here reviewing, I figured I'd also share my 5-Star review of Fated Love which has been on Goodreads and Amazon for a while now. :)
Book format: e-book 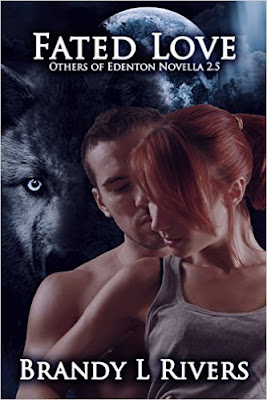 FATE LOVE by Brandy L Rivers
Others of Edenton #2.5, novella
Genre: Paranormal Romance
- SYNOPSIS -Does knowing what’s coming ever really help?
Christian asks this question every single day. He knows he’s meant for one woman, but that doesn’t make telling Delilah easier.
Delilah knows what she wants, but doesn’t understand why Christian never asks her out.
One bad date after another, and she finally decides to take matters into her own hands. Until she sees an old friend whispering in his ear, and her hope comes crashing down.
Will fate push them together when his nightmare comes true?

- REVIEW: 5 STARS -
Christian and Delilah's story was short, but amazing nonetheless. And how could it not have been? I mean, it's written by Brandy L. Rivers after all. ;)

Christian had been in love with Delilah since he'd met her, he just hadn't found the courage to actually make a move...until he HAD to. Being there during Delilah's most vulnerable and confusing time, brought Christian and her even more together than either of them could've ever hoped for. Becoming a werewolf was supposed to be a dangerous transition, but for her, thanks to Christian, it was an event that couldn't have gone smoother, much to everyone's surprise.

This installment takes us on the journey of how Delilah and Christian become a couple, but if there's one thing that I absolutely LOVE about The Others of Edenton Series is how ALL the characters connect. Yes, they all connect one way or another. Keep on reading the series and you will see for yourself. I've read most of the books out of order, so now I'm trying to catch up with past books I've missed, and trying to do so while following the series order.

- ADD THE SERIES ON GOODREADS -
https://www.goodreads.com/series/106492-others-of-edenton

- Others of Edenton BOXSET #1
Includes: New Beginnings, In Too Deep, Shadows Fall, and Shadows of the Past: http://amzn.to/1MFma1L 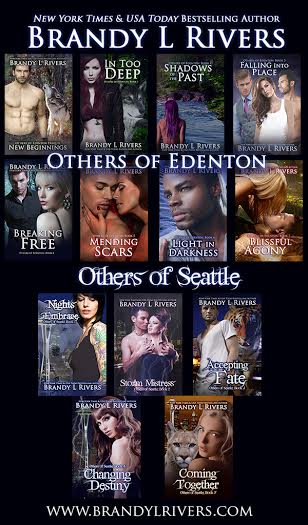 - ABOUT THE AUTHOR -
Brandy L Rivers is a New York Times and USA Today bestselling author. Her two main series are Others of Edenton and Others of Seattle. She has also written a couple contemporary stories. An avid reader, Brandy has always loved writing. She became serious about it as a stay-at-home-mother. Her secret lair, guarded by a pint-sized pound puppy who imagines himself a hellhound, contains a file full of manuscripts she plans to edit and put out with new creations she is constantly dreaming up. Living in rainy Western Washington with her husband and three kids, Brandy is already working on future stories in each of the series, and several other projects.