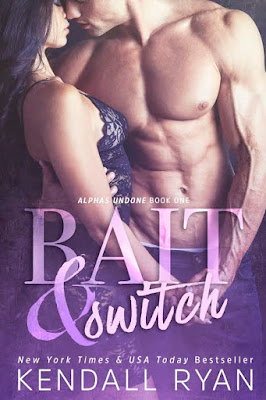 Title: Bait and Switch
Author: Kendall Ryan
~ SYNOPSIS ~
Love is a trap, a trick only other people fall for. Former Navy SEAL Nolan has no such illusions. The only things real in his life are his beloved bulldog and the two women who regularly share his bed. One is light—soft, innocent, and tender touches. The other is dark—and gives him all of the wicked things he craves behind closed doors. It’s not cheating when each is aware of the other. But when he begins to feel much more than he ever bargained for, the order of his carefully crafted world is shaken, and he stands to lose everything.

Nolan thinks we met by chance. We didn’t. I sought him out, seduced him, and in return got the sanctuary I needed to survive. But now, impossibly, I’ve fallen in love with him. I don’t care that he has another lover, because when he finds out who I am, it’s going to ruin any chance I ever had with him anyway. She’s the least of my worries.

Bait & Switch is Book 1 in a new contemporary romance series called Alphas Undone, which will each feature a new couple.

This is a standalone novel with no cliffhanger.
ADD TO GOODREADS 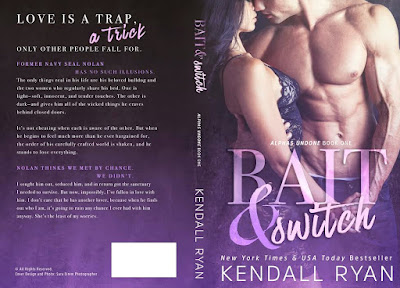 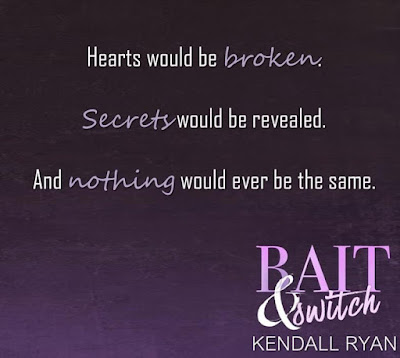 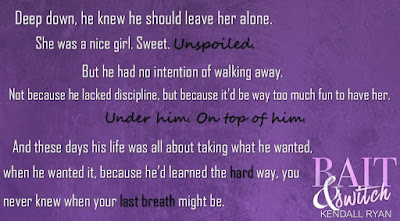 “So, how does all this work? Do you mind if I pry a little?” Her cheeks heated slightly, knowing all the questions spinning in her mind. It was one thing to hear about it over drinks the other night, it was quite another to see it with her own eyes.

“Pry away,” he chuckled softly, his hand slowly stroking up and down against her spine.

Awareness zinged through her. It had been a long time since she’d felt a man’s touch. Six months to be exact.

“How did she end up living here with you?”

“I knew her through a mutual acquaintance, and after breaking up with her ex, she needed somewhere to live. I offered my guest room up. Rent free. No strings. And she said yes.”

“That was awfully nice of you.” She blinked at him in wide-eyed astonishment. It wasn’t something many people would do.

“Trust me, I’m very far from being a white knight.” His voice dropped lower, and his hand came to rest at her lower back again. “Our relationship sort of evolved from there.”

“What else is going on inside that pretty head of yours?” he asked.

“H-how did you come to be this way?” She cringed when she realized how it sounded.

As though he was damaged goods. Then again, maybe he was. Nolan didn’t even raise an eyebrow to her question.

“After a demanding career as a SEAL …” He let out a deep sigh, gazing down at the courtyard. “My goals are much simpler now – to enjoy life one day at a time and take pleasure where I find it.”

She simply nodded. He didn’t elaborate, but he didn’t need to. Growing up in a family of men who served, she knew he had seen too much, done too much, probably experienced losing teammates he fought beside. She knew it could mess a man up. At the very least, it changed them. And in Nolan’s case, it made him harder and closed him off to the hearts and flowers kind of love she hoped to find someday. He was surviving, in his own way.

“I need to know what you taste like,” Nolan murmured.

She blinked up at him, her eyes still searching his. There was so much she was unsure about, but the electricity buzzing between them wasn’t one of them.

He leaned forward, moving slowly, and brought his lips to hers. Hesitating for just a moment, as if to give her a chance to decide, Nolan’s warm breath ghosted over her mouth.

Lifting up onto her tip toes, Lacey touched her lips to his. With one hand stroking her jaw, his other came to settle against her hip, his thumb running along the bare skin at the waistband of her jeans. Nolan pulled her body close, until she felt the hard ridge of him against her belly. He felt massive. Her lips parted in a silent gasp and he stroked his tongue against hers.

His mouth seemed made to fit over hers. And the skillful way he moved his tongue provoked thoughts of what other ways he could use that tongue. While her panties grew wet, and her breathing turned ragged, they kissed deeply for several minutes.

Her hands wandered, running over his firm biceps, and down the front of his shirt where rounded pecs waited invitingly under his shirt.

Sex rolled off of him in waves. No, not just sex. Fucking. Lacey was sure that being intimate with Nolan would be unlike any other experience she’d had. And that excited the hell out of her.

“God damn, woman,” he murmured breaking away from her lips.

Lacey couldn’t disagree. Everything about that kiss felt right. Backgrounds ceased to matter. Messy entanglements forgotten. When she was kissing Nolan, nothing mattered except getting even closer. More, her body begged.

“Just keep an open mind,” he said, tucking a stray lock of hair behind her ear. 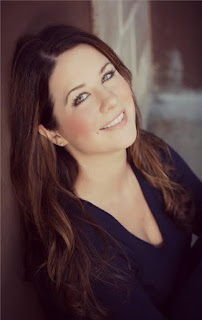 ~Kendall Ryan~
Kendall Ryan is the New York Times and USA Today bestselling author of contemporary romance novels, including Hard to Love, Unravel Me, Resisting Her and When I Break.

She's a sassy, yet polite Midwestern girl with a deep love of books, and a slight addiction to lipgloss. She lives in Minneapolis with her adorable husband and two baby sons, and enjoys hiking, being active, and reading.

Visit her at: www.kendallryanbooks.com for the latest book news, and fun extras.