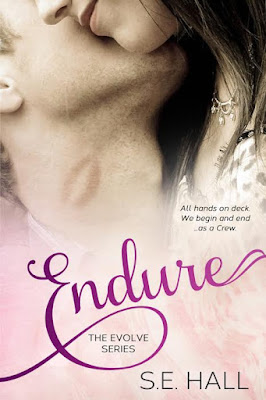 Title: Endure
Author: SE Hall
Series: Emerge, book #4
~ SYNOPSIS ~
Our vessel may have cracks and dings, tatters in its sail, and sometimes takes on water… but it still cuts through the waves with authority.

Because of its Crew – bonded for life.

Will this be our final voyage… or just the beginning of a new chapter in our lives. 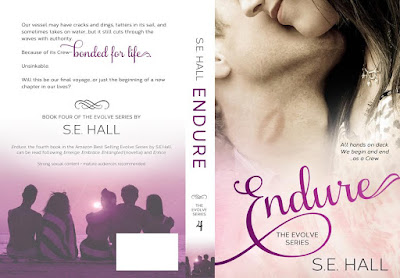 You know how it’s really loud on a plane, that constant, distorted hum overhead while in flight? So that even when the person in say, 2A, is talking to their neighbor in 2B, they have to raise their voice some, or lean in, to be heard?

Imagine then, if you will, the volume at which Sawyer Beckett would need to bellow from the last row of first class to ask me, the actual occupant of 2A, something.

“This is all your fault, Kendrick! Even this punk kid I’m gonna kill agrees with me! Don’t ya’ Ryder? And don’t think I didn’t catch that his name sounds like RIDE HER!” Sawyer screams as though we’re the only ones on the plane. I don’t have to turn around to know Emmett’s crimson face is ducked in mortification and everyone seated around him is currently wondering, terrified of the answer, if security checked him thoroughly enough for stashed weapons… since he’s clearly displaying some insane tendencies.

And I’m unsure exactly what’s “my fault”- not that I’m gonna yell back and ask. Laney sticks out her hand to stop the stewardess, who unfortunately for her unknowing self, chooses now to walk by. “Are you people still possibly serving the very large lunatic back there alcohol?” Laney asks her pointedly.

The attendant offers a sheepish smile and shrugs. “No ma’am. The lady with him already slipped me a note forbidding it. But I believe he may be coercing the frightened young man seated in front of him to order and then stealing the drinks from him.”

“Okaaaaay,” Laney drawls out. “Just a thought.” She holds up a finger, then uses it to tap her chin in the most condescendingly ‘I have a polite suggestion’ manner possible. “How ’bout we stop serving him too then? Sound like a plan?”

If you really tried, you just might be able to catch a drip of the sarcasm in her question. 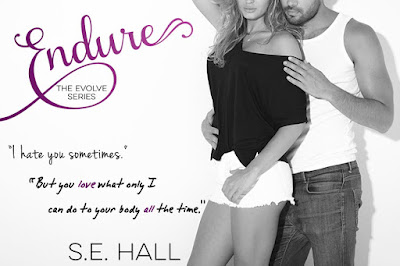 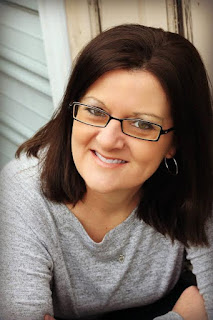 S.E. Hall is the author of the Amazon Best Selling Evolve Series, Emerge, Embrace, Entangled (novella) and Entice as well as the bestselling stand-alone NA Romance, Pretty Instinct. She has co-written Stirred Up, Packaged and Handled, a collection of erotic short stories with her CP and friend, Author Angela Graham as well as a collaboration titled Conspire, a romantic suspense with friend and author Erin Noelle. She is honored to be a part of the USA Today and NYT Best Selling Conspire by Erin Noelle and S.E. Hall Cover Re-reveal Html Devour box set. S.E., which stands for Stephanie Elaine, resides in Arkansas with her husband of 18 years and 3 beautiful daughters of the home, and one married daughter who graced her with two beautiful grandchildren. When not in the stands watching her ladies play softball, she enjoys reading and writing and the occasional trip to the casino. She’s also clutch at Baggo, when it's warm outside, and definitely the woman to pick on your side for some Flip Cup!