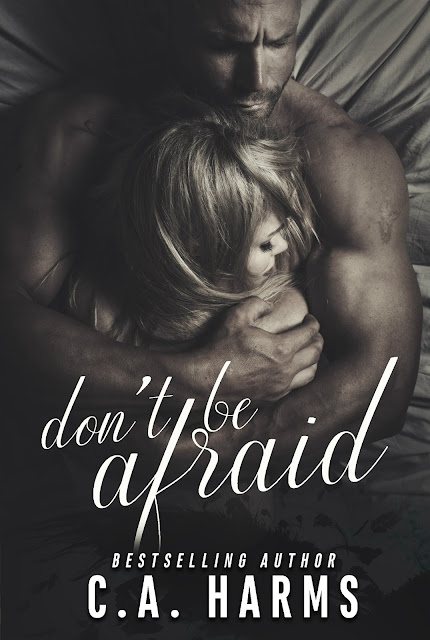 DON'T BE AFRAID by CA Harms

Have you ever looked at someone and just knew,


knew that they were put in your life for a reason?


The one person that would be not only your best friend,


but would be your absolute everything?


That’s how I felt the first time I saw him.

Don’t be Afraid, he said.
Life can change so quickly.
One moment you can be smiling and feeling as if you're walking on clouds and the next, everything you love, everything you treasure crumbles at your feet.

He was my angel then, and he’s still my angel now.
In a way, I believe he’s still looking out for us, giving us a future.
Sometimes it’s as if I can still feel his presence,
guiding us and keeping us safe.

GET NOTIFIED THE SECOND IT GOES LIVE ON AMAZON!
http://bit.ly/DBAReleaseNotification 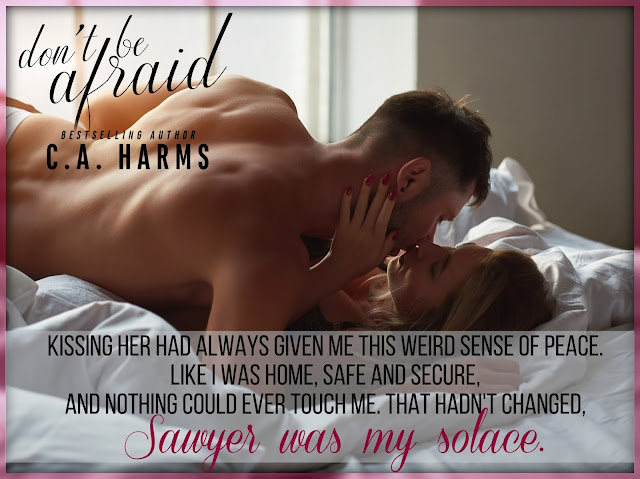 EXCERPT REVEAL
I sat in the darkness with my legs curled up in the chair, my body shielded by the large blanket I had wrapped around me. I’d thought of going to bed a long time ago, but instead, I was listening to the Pat’s breathing patterns.

This was his third night sleeping in the hospital bed in the center of our living room, and though he hated it, I knew it was easier for him to sleep on than our old worn out couch.

Each night after he’d fallen asleep, I tried to go to bed, but I eventually found myself back in the living room, watching him and listening to his breathing. I guess I needed it for my piece of mind. Though his breaths were weak and labored, I still needed to be able to hear them. I think in some weird way it was comforting.

When he was asleep he wasn’t angry or fighting to push people away. He was just peaceful. I needed to see him this way, I guess, because the hard times were beginning to drown out those happy memories and each day I found it more and more difficult to hold myself together.

The room was dark, save for the illumination from the light above the sink in the kitchen. The gentle hum of the refrigerator was the only other sound. I’m not sure at what point I allowed myself to fall asleep, but I was jolted awake by the sound of his raspy voice filtering through the darkness.

I sat up straight and the cover slipped from my shoulders as I leaned forward, looking him over from head to toe. My heart raced as the thought of being here alone with him when something catastrophic happened. The moment my eyes reached his, I found him staring back at me.

“Is everything okay?” He shook his head, and my heart seized in my chest. I stood and walked toward his bed, my hands shaking as I did my best to stay in control of my fears. “What hurts?”

He lifted his hand and rested it over his heart.

I stared at him in confusion.

“I’m sorry.” I could sense whatever it was on his mind was hard for him to face as his eyes shimmered with unshed tears. “Please don’t hate me.”

Suddenly it was hard to breathe.

“Why would I hate you?” I took his hand and offered a gentle squeeze. “I could never hate you, Patrick.”

“I’ve been such an ass and knowing this, but unable to control it breaks me.”

“You’re going through so much,” I said as I sat on the edge of his bed.

I closed my eyes for only a moment when he ran his fingers through my hair that hung loose over my shoulders. “I’ve allowed the fear to consume me and gave it the power to make me forget what I have. I’m just scared.”

I opened my eyes, and his cheeks were wet from the tears he tried to control.

“I’m so scared of everything I’m gonna miss. I’m scared of not being here to protect you and Abigail.” He took in a shuddering breath. “I don’t want you to be alone, Sawyer.”

MEET THE AUTHOR:
C.A. Harms is like any other addicted reader. She enjoys happy endings and HEA love stories. She hasn't always been a lover of Romance and had once been addicted to a good Mystery. Just recently she has taken on a new liking and now is a full blown Romance novel addict.