I NEED YOU FOREVER by @CynthiaPONeill: #BookTour #GIVEAWAY #99cents 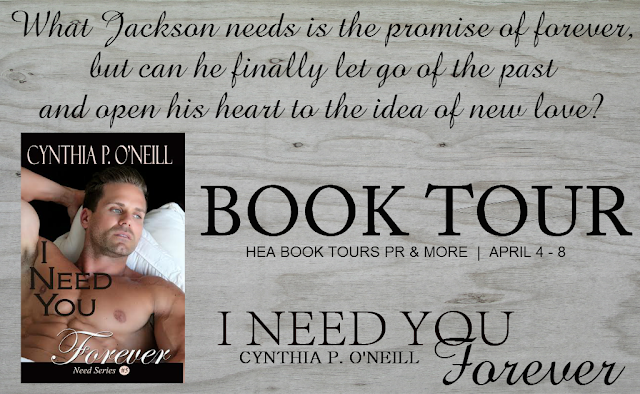 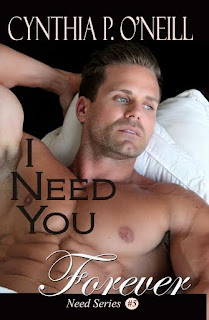 Robin Patrick was a dynamo for the Marketing Department. She came in when all hell broke loose over Gabi’s death, doing everything to ease Jackson’s stress levels and keep her mind off her own problems too. Everyone thought she had it all together, not realizing she was living a lie - covering who she was for the past three years. She’s hiding from a monster who wanted to own her and her father’s company that wants to stop the investigation into his death.

She’d pulled everything off until the one person who’d been her rock had been lost to her forever. A chance encounter with her boss, in the most unlikely of places, was the beginning of her salvation and the road to a temptation she wasn’t sure she’d survive.

Jackson was a force to be reckoned with, an alpha extreme, perfect for her submissive nature. At least she could forget about her past, for a while, and enjoy the pleasures of today – knowing that an eternity would never be possible with someone who couldn’t love her as long as he held onto the memories of his wife or could it?

What he Needs is the promise of forever, but can he finally let go of the past and open his heart to the idea of new 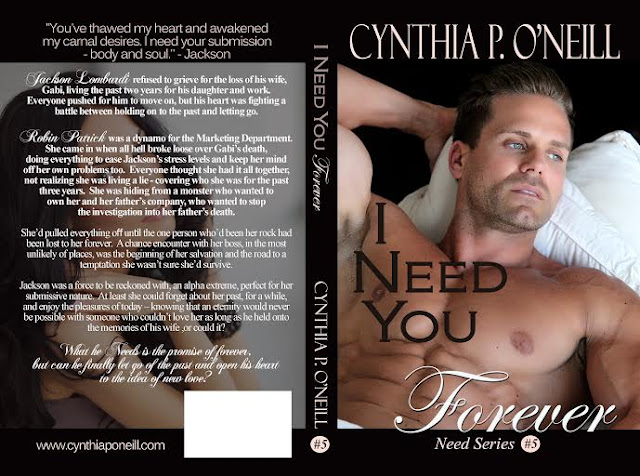 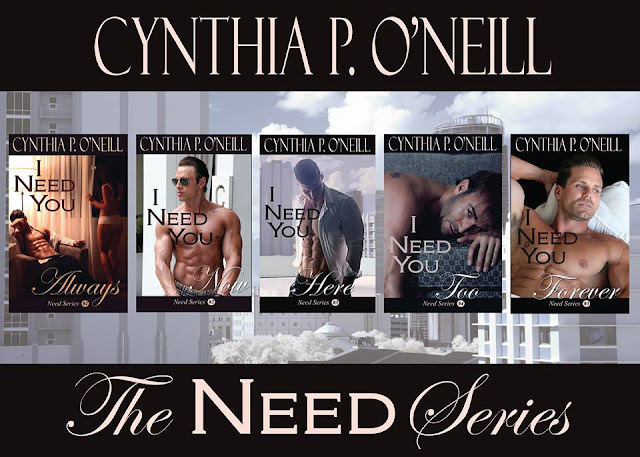 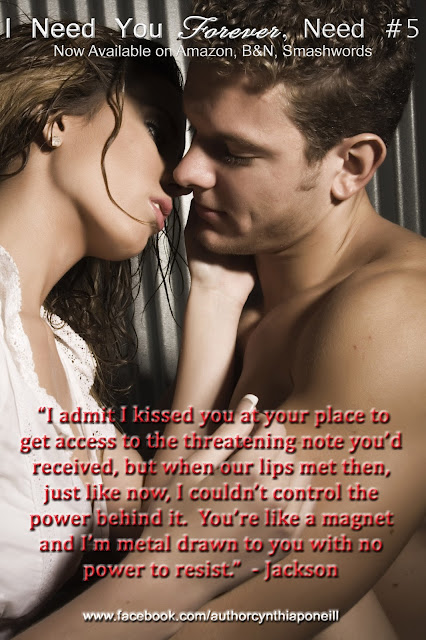 I reached out for him, wanting to pull him closer for a kiss. He shook his head before he reached up under my shirt and pushed it up over my head to where my hands were stretched out. “I told you I didn’t want you to move those hands, or I’d bind them.”

Jax took a deep breath in, before admitting, “I want so badly to tie your hands with my shirt because I need the control it would provide, but I don’t want to trigger any bad memories.”

I lifted my arms to him with the shirt still hanging loose around my wrists. “Go ahead, sir. Do with me as you please. I’ll let you know if things get too much for me.”

He took the shirt and began to twist it a few times, pulling it here and there until my wrists were bound, and then returned my arms to the bed. His body was perched above mine taking in every inch of me before he grabbed my panties, ripped them from my body, and left me bared to him. “I don’t want any contracts between us. We both know what the BDSM lifestyle is about. I assure you, I’m not a sadist or masochist. I only live for the dominance, the submission, and a little kink in the bedroom. I’ll ask you about things and how you feel about them prior to us doing anything. You can pick a safe word if you’d like, but if you tell me to stop, then I’ll do just that.”

His face drew up in a scowl. He hated mushrooms as much as I did, but then it dawned on him. “Your safe word?”

His lower body pressed against mine while his arms tried to support most of his weight. A half smile lit up his face. “Only you’d pick something that we both hate as a safe word.”

I couldn’t help but smile with the look he was giving me - one of adoration. I knew this was a pivotal moment and there would be no going back. I only hoped the risk of jumping in was worth it.

Jackson’s tone got serious. “You are so beautiful, someone I’ve come to care about and cherish. I know we just promised to take things slow, but I don’t know that I can resist any longer. You’ve thawed my heart and awakened my carnal desires. I’ve fought the urges to kiss you and to be with you, but I can’t fight any longer. I need you, Robin. I need your submission to me – body and soul.”

“Yes,” flew out of my mouth in a heated sultry tone as I arched my back to him. His words were heating me from the inside out, and I needed to feel the power of the connection surging between us. I wanted to experience the force of his dominance.

A smirk spread across his face as his hand pushed some of my hair back behind my ear. “Don’t think for one minute that I’ll let you have all the control. I’ll do right by you and test your limits. All I ask is that you trust me to guide you to where we both find nirvana.”

I closed my eyes and cherished each word he’d just said. “Yes, sir.”

He continued to rest his weight on my lower body as he wiggled his way out of his boxers and threw them on the floor. His knees pushed mine further apart as he slipped his fingers through my folds to test my wetness. “You’re soaked.” He seemed surprised.

“Only for you, sir,” I admitted sheepishly, casting my eyes down because I wasn’t supposed to have direct eye contact with a dominant. 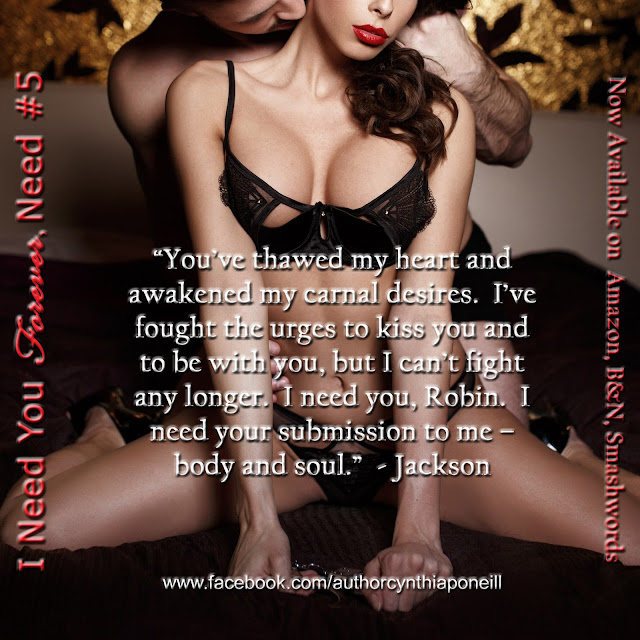 – ABOUT THE AUTHOR –
Cynthia P. O’Neill grew up in small town in South Florida and moved to Central Florida to attend college. There, she married her friend, love, and soul mate and still resides with their amazing son, and a feisty, four-legged little boy.

In her books, Cynthia draws on her background in healthcare and business, along with her husband’s engineering knowledge.

She currently writes on all levels of Romance. The Remembrance Series encompasses New Adult with a touch of Paranormal activity and a hint of Historical romance. A Learning Series is for those who like a little more steam with their books, falling into the categories of Contemporary - Erotica, with a hint of suspense.

She tries to make her writing very personal and close to her heart. Regular life is the inspiration for her books, but her imagination takes them to new heights, opening up possibilities that would normally not exist.

To learn more about the author, please visit Cynthia’s website at: www.cynthiaponeill.com